A Single IRB means one IRB of record (or Reviewing IRB), selected on a study-by-study basis, provides the regulatory and ethical review for all sites participating in a specific multisite study.

For questions about collaborative research, please note the following:

At UCI, a single IRB will be required for the following types of non-exempt cooperative (multisite) research carried out within the United States:

Reliance agreement is a formal, written document that provides a mechanism for an institution engaged in research to delegate IRB review to an IRB of another institution. Institutions may use different descriptive terms, (e.g., reliance agreement, cooperative agreement, IRB authorization agreement (IAA), or memorandum of understanding (MOU)). Agreements may cover single studies, categories of studies, or all human subjects research under an organization’s Federalwide Assurance (FWA).

Reviewing IRB is the IRB that conducts initial and continuing reviews, and will review modification to approved protocol and unanticipated problems or adverse events that may arise. The Reviewing IRB will have the authority to suspend the research for failure to comply with conditions of approval or regulatory requirements.

Relying IRB will rely on the IRB review of the Reviewing IRB. The IRB may refuse, on a case-by-case basis, to rely on the review of another IRB.

When UCI Requests to Rely on Non-UCI IRB?

Current UCI policy requires that all faculty, staff, and students must have UCI IRB approval before they begin research with human subjects. This requirement applies regardless of the source of funding and even when no funds are involved, regardless of the site of the study activities.

UCI will consider relying on another institution for IRB review on a protocol by protocol basis when a UCI investigator is engaged in human subjects research with a non-UC investigator and:

To facilitate human research and in response to requests by investigators for a more streamlined IRB review process UCI allows for researchers to request that UCI rely on a non-UCI IRB.  This may be indicated through the UCI IRB Application process. Include a copy of the approved study documents from the Reviewing IRB. The UCI IRB will then make a determination as to whether it is appropriate to defer to another IRB, and will notify the investigator of the decision. Note: accepting the review of another IRB does not eliminate the UCI investigator’s responsibility to seek approval from other applicable UCI regulatory entities (e.g., Institutional Biosafety Committee, Radiation Safety Committee, and Human Stem Cell Research Oversight Committee). Please contact the HRP staff for more information.

When Can the UCI Serve as the Reviewing IRB (IRB of Record) for non-UCI entity?

UCI will consider serving as the Reviewing IRB for a non-UCI entity (site or individual researcher) on a protocol by protocol basis for research where: 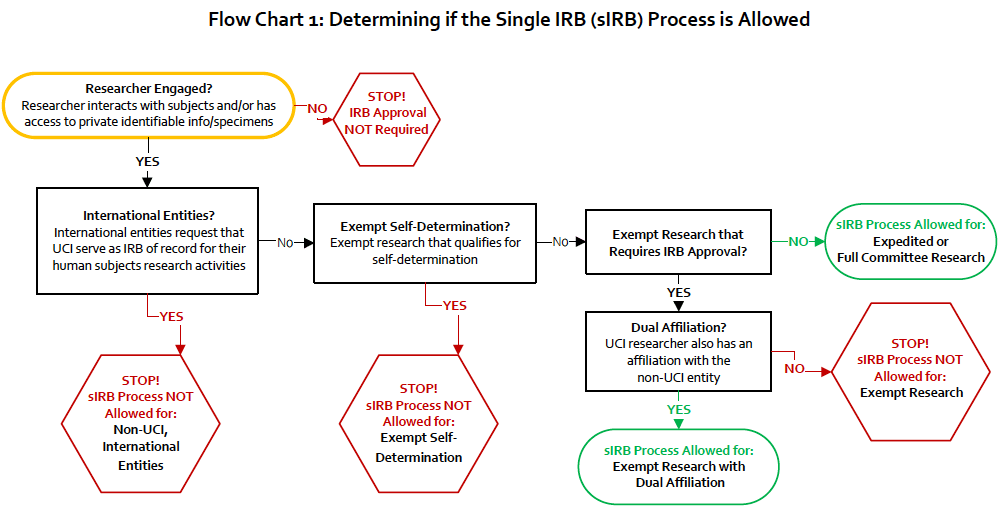 Review the flow chart below to determine which sIRB agreement applies.

UCI requires the appropriate sIRB agreement, signed by the relying entity, with the request for UCI to serve as the Reviewing IRB. All templates for sIRB agreements can be found on IRB Forms.

Submitting an sIRB Request to the UCI IRB

The following revisions and documentation requirements will need to be addressed during the amendment, as applicable.

When Can the UCI IRB Serve as the HIPAA Privacy Board for a non-UCI Entity?

The UCI IRB will consider serving as the HIPAA Privacy Board only when the non-UCI entity is within California and it does not have a privacy board. Exceptions may be considered.

During the review process, the UCI IRB determines whether participants should sign an "Authorization" or if a Waiver of HIPAA Authorization may be granted. The non-UCI entity may use the Relying Site HIPAA Research Authorization template. Each institution will retain their own Privacy reporting responsibilities should a breach of privacy occur.